Food for thought from ASHG 2022: Affordable, comprehensive, and accessible variant analysis and interpretation with the SOPHiA DDM™ Platform 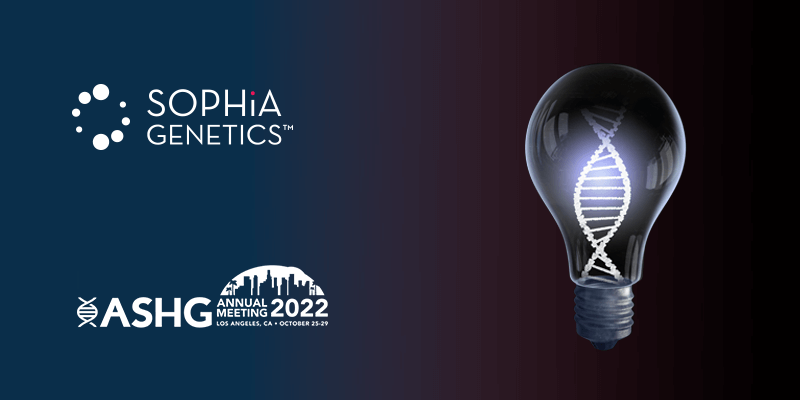 At the American Society of Human Genetics (ASHG) Annual Meeting this year, our esteemed speakers shared the ins and outs of how the SOPHiA DDM™ Platform, in combination with Alamut™ Visual Plus, adapted to their laboratories’ needs to provide sample-to-report workflows that streamlined the identification and interpretation of nuclear and mitochondrial variants associated with rare and inherited diseases, including hereditary cancers.

Speaker Mark Williams began his talk by highlighting that a key goal of the Genomic Diagnostics lab is to facilitate equal access to hereditary cancer testing. To do this, the lab set multiple criteria that were highly important to them when developing a new hereditary cancer application. Employing the complete SOPHiA GENETICS™ workflow for Hereditary Cancer allowed the team at Genomic Diagnostics to successfully meet these testing criteria.

In collaboration with Genomic Diagnostics, the custom SOPHiA DDM™ Hereditary Cancer application was designed to include genes that align with current practice guidelines. It was important to the lab that the pipeline could detect SNVs, Indels, and copy number variations (CNVs) in a single workflow. Mark confirmed that the resultant application effectively detects CNVs and is scalable, with turnaround times that meet their needs, even with testing volumes increasing year-on-year. In addition, the solution provides high-quality, consistent results, a full record of curation, visualization of BAM files, and is easily accessible and usable by all laboratory staff.

Like numerous other SOPHiA GENETICS™️ customers, Mark concluded that the SOPHiA DDM™ Platform offers a robust, automated, and secure bioinformatics pipeline that meets Australia’s privacy regulations. In addition, the software is extremely user-friendly, from its visual interface to the detailed QC metrics, annotation information, and links to databases. All laboratory personnel can effectively use the end-to-end solution, even without prior bioinformatics expertise.

The workflow for each batch of 70 samples (plus one control) in the Ontario group laboratories, consists of DNA preparation, automated 3-day library preparation using the SOPHiA GENETICS program on the Hamilton STARlet, and sequencing on a NextSeq® 550 using mid-output. Sequencing data are automatically uploaded to the SOPHiA DDM™ cloud for processing ahead of analysis. For additional time savings, genes requiring special consideration due to the presence of pseudogenes are flagged with a warning in the SOPHiA DDM™ Platform and the SOPHiA GENETICS™ support team is on hand to answer queries on unusual findings. The cloud-based software for data management enables the laboratories to streamline data access, storage, and archiving back-up. Dr Wang shared that the time saved through this workflow has been instrumental in maintaining turnaround times, especially with significant understaffing during challenging periods.

By applying Virtual Panels and custom filters, the teams can analyze from as little as a single variant to as many as 76 genes using a single workflow. The high analytical sensitivity and specificity enable the laboratories to pick up unusual findings, such as Alu insertions, Boland inversions, and low-level mosaicism of copy number changes. And finally, the one-step secondary and tertiary analysis for concurrent detection of SNVs and CNVs allows the teams to significantly speed up their analysis, and the pseudogene pipeline enables the laboratories to minimize reflex testing. In summary, the custom SOPHiA DDM™ Hereditary Cancer application provides the Ontario laboratories with a one-size-fits-all solution.

In the Pathology laboratory at the University of California, the proportion of positive/probably positive variants detected in pediatric and prenatal cases analyzed using the SOPHiA DDM™ Custom Whole Exome Solution (optimized for the Illumina NovaSeq 6000) was consistent with the literature (see charts). Approximately 70% of the positive pediatric cases were associated with autosomal dominant inheritance. Most reported variants were missense single nucleotide variants (SNVs), with the positive cases fairly equally split between frameshift, nonsense, and missense variants.

With the goal of increasing the proportion of positive findings, Jessica and the team at UCSF explored what additional variants could be identified by exome sequencing to potentially solve the ∼10% of inconclusive cases and ∼65% of negative cases. First, the team investigated the impact of calling copy number variants (CNVs), specifically contiguous gene changes, whole gene changes, and exon-level changes. UCSF worked closely with SOPHiA GENETICS™ to optimize their exome sequencing to ensure high and even coverage for accurate CNV detection, and indeed doubled their sequencing depth to 80M reads to ensure the sensitive detection of CNVs 1-2 exons in size.

Next, UCSF wanted to be able to simultaneously call variants in mitochondrial DNA, which is especially relevant for metabolic diseases. Different cell types have different numbers of mitochondria, and each mitochondrion has its own genome that can have different variants in it (heteroplasmy). The UCSF team, therefore, wanted to assess the lower limit of detection for mitochondrial heteroplasmy through a mixing study, which concluded that exome testing could detect variants down to 5% variant allele fraction with high sensitivity.

In conclusion, the custom SOPHiA DDM™ workflow for exome sequencing successfully increased positive/probable positive findings at UCSF to 25-30% by integrating both CNV and mitochondrial variant detection.

We thank all our speakers for sharing their research stories at our ASHG symposium this year. We’re delighted to hear how their integrated SOPHiA DDM™ workflows are reducing workloads, expanding access, and continuing to discover new variants associated with rare diseases and hereditary cancers.